Sometimes, competing priorities get in the way of...well, priorities. After stealing moments here and there for the past week, I finished our "Mo-Skee-Tos Who Drink Mo-jitos" team hats!
When I came up with the concept, it was freezing. A nice warm fleece hat would be so adorable and just the thing, I thought. After racing against the clock and staying up until 1am to finish off the hats in time for our upcoming game, there was an unprecedented February heat wave (it got up to 70!). Heh. Figures! 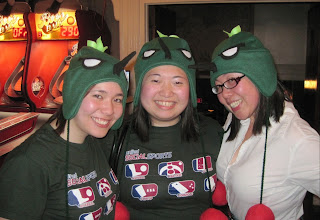 it's not "asian blush"...we were really warm in our hats! - pic by AG
Despite the warmth of the hats, or perhaps because of it, our team was on FIRE! We're currently 3 - 1, and second in the league! WOOHOO!
Next week is the team tshirt contest and we're hoping we're going to win with our awesome hats!!! GO TEAM! 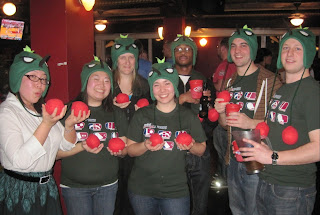 LittleAsianSweatshop on Etsy is open for business!

LittleAsianSweatshop on Etsy is back and open for business!

Currently, old favorites are available, but awesome new products will be listed in the upcoming days!
YAY!
Posted by Unknown at 12:37 PM No comments:

Email ThisBlogThis!Share to TwitterShare to FacebookShare to Pinterest
Labels: etsy

Before I reopen the Etsy shop I am currently whipping out 10 fleece hats for my skeebar (skeeball) league. Heh. I didn't know that there was such a thing as a skeeball league, but one of my friends were looking for new players and fortunately athletic skill isn't required! Which is a good thing, since I have (in)famously fallen off a stationary bike.
As our team are the "Mo-Skee-Tos Who Drink Mo-jitos", I wanted to incorporate all the elements - mosquitos, mojitos and skee. Not sure if I'm 100% successful - I started off trying to make a cute mosquito (note the "mint" leaf tuff at the top and the red balls for, um, balls) - 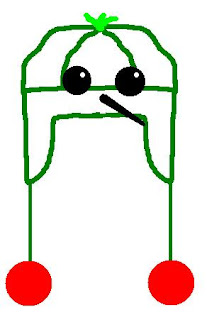 clearly, I can't draw in MS Paint
but late night sewing after an action packed weekend left me a little cranky and the cute "mo-skee-tos", turned a little mean. 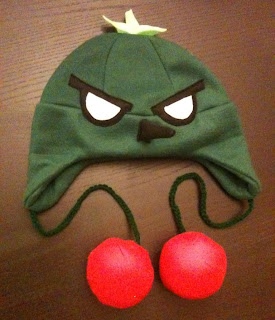 no longer a cute and cuddly mo-skee-to
Hopefully it'll scare the other teams - since my skeeball skills certainly don't!
I also tried something different with the balls on the end of the hats.  Usually, I would make the balls out of yarn or with fur, however, I wanted something that was solid (as opposed to fluffy yarn), and with not too much texture (as opposed to fuzzy fur), so I decided to use fleece for the balls as well.  The fleece "skee" balls definitely fit this hat, and I like the spot of red in this otherwise monochromatic hat (forest green is also our team color).  My only small quibble is that because fleece is so soft, it doesn't have much form, so the balls are easily squished and don't look quite as perfectly round.  I think I can solve this by using more stuffing in the balls. Fortunately, I have a few more days before the next game, so I have time to play around with this. 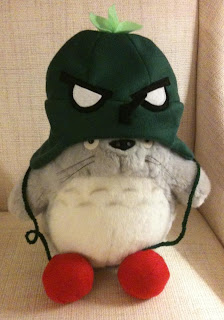 Little known fact: Totoro is a champion skeeball player
Posted by Unknown at 11:05 AM No comments:

While the Sweatshop was in the middle of being unpacked, I had told my friend, CM, about a great fleece sale at the local Joann's and how these would make great blankets (her toddler loves blankets!).  I offered to whip out a blanket for her if she would just buy 2 pieces that would match.


So after work that day she got a cute puppy print fleece and the other was a plain marigold fleece and was just expecting me to stitch the two pieces together.


Clearly, she didn't know the depths of my insanity.


Although the plain fleece matched the yellow in the puppy print perfectly, I really didn't Iike that one of the pieces was totally plain; it just wasn't interesting or cute.  This blanket was for her toddler, so to me, both sides had to have something interesting for the child to look at.

I cut out strips from each side, with 45 degree corner cuts, from the two pieces. Using these strips, I was able to make a frame, so that the blanket would be reversible with a design on each side. 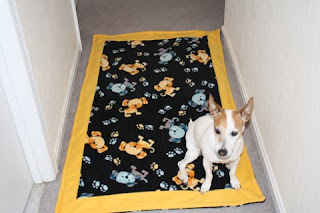 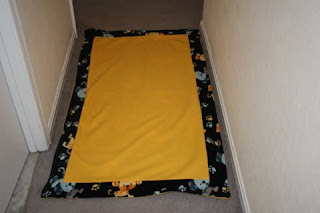 My friend was completely overwhelmed when she got the blanket (I think she was crying on the phone when she left me a message thanking me!) - she clearly didn't expect me to go through all that "effort". It was such a simple thing, but it made me glad that I put in that little something extra. Sometimes, being a little nutty about aesthetics pay off...it made a good friend feel touched, and it in turn made me feel even better.


Finally, before I dash back into my Sweatshop, happy Chinese new year everyone! I am ever hopeful that this is going to be a great year!
Posted by Unknown at 4:47 PM No comments:

Where to find me

Other cool sites/blogs that has nothing to do with sewing (well, some do)